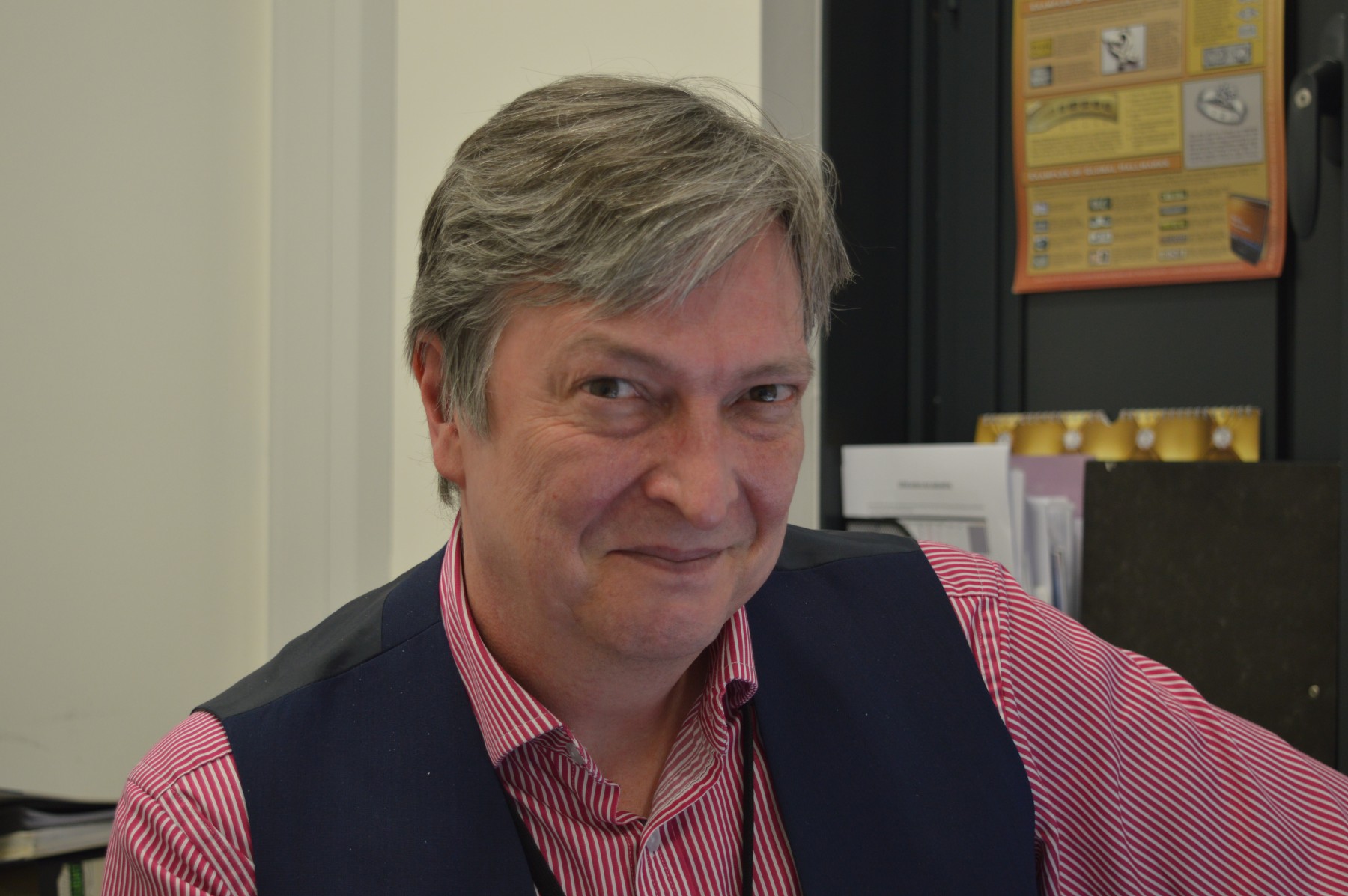 A key part of my role as a valuer for Safeguard at the Birmingham Assay Office, is ‘silver specialist’, which entails the valuation of antique silver, along with trophies and ecclesiastic (church) items.

Recently I was asked to undertake the valuation of the B.R.M. trophies for Rubery Owen. The trophies were professionally scanned and digitally photographed at Genus Digitisation Solutions in Nuneaton. Four of these trophies are now exhibited at the new ‘Silverstone Interactive Museum’ - BRM's 3 BRDC International Trophy victories at Silverstone in 1957, 1962 and 1965, and the FIA Coupe Des Constructors 1962*.

I was impressed with the setup at Genus Digitisation Solutions. It is great to see the digitisation of historical archives with state-of-the-art 3-D imagery capturing such a historical collection. I was made most welcome by Paul Negus and his team.  They gave me unhindered access to all the items enabling me to carry out my job of photographing, measuring and describing all 68 items in 3 days without sacrificing the security and well-being of the trophies.

Whilst undertaking the valuation, I was amazed by the different research methodologies available compared to the last valuations undertaken in 2000 and 2004.  In one click, Google pinpointed every Grand Prix in the period, with the results and times of the race and qualification status. Some of the grainy black and white images from the 1960s helped me recognise two trophies in particular.  They were the 1963 Monaco Grand Prix trophy and the Italian Grand Prix trophy from 1962.

The 1963 Monaco Grand Prix trophy's previous valuation described it as either the first or 2nd place trophy.  However, the sourced photograph shows Graham Hill holding this cup. Although only the top of the handle is visible, it is distinctive from a design point of view, so I was confident in identifying it as the first-place trophy.

Similarly, the Italian Grand Prix trophy was described in the 2000 valuation as ‘an un-inspiring Italian 800 grade silver cup and not worth much more than scrap silver content (with an associated value of £180). Once again, a sourced photo of Graham Hill holding it at the 1962 Italian Grand Prix led to the identification and an associated far higher insurance value.

The most moving of all the trophies valued was the Austrian Grand Prix trophy. Won by Jo Siffert in 1971, he also achieved pole position and fastest lap in the same race. A sourced photograph shows the trophy, without its lid, being carried by a woman behind Siffert, as he celebrates by spraying champagne into the crowd. This was the final trophy he won before being tragically killed in his next race at Brands Hatch less than two months later.

From a silver standpoint, it was enlightening to find out how countries use different approaches to source trophies for motor racing. In Britain, we favoured the purchase of second-hand sterling silver trophies rather than the purchase of silver-plated awards or commissioning new ones from contemporary silversmiths. All of the British trophies have date letters on the hallmarks which pre-date the races.

The Italians are the reverse and favour using very similar designs. If new trophies are not engraved with a presentation plaque or inscription, it has led to them being un-ascribed. There are two identical trophies in the collection; one would be for Jackie Stewart’s success in the 1965 Italian Grand Prix and one; for Peter Gethin’s victory in 1971.

The American trophies from the mid-’60s are as big and brash as you would expect and take the form of punch bowls into which you could fit a fair-sized toddler! Similarly, to Britain, Monaco seemed to use re-cycled trophies for their Grand Prix’s, underlining the Principalities cosmopolitan flavour; one is Swedish, one Italian, one French.  It is thought they were sourced from the Royal collection.

A favourite of mine is the 1965 Monaco Grand Prix trophy, designed as a rose bowl.  Decorated with rectangular panels of white and blue sodalite to the sides and is signed by Cardeillihac Paris. It is a stunning example of silver design by a fantastic quality silversmith. 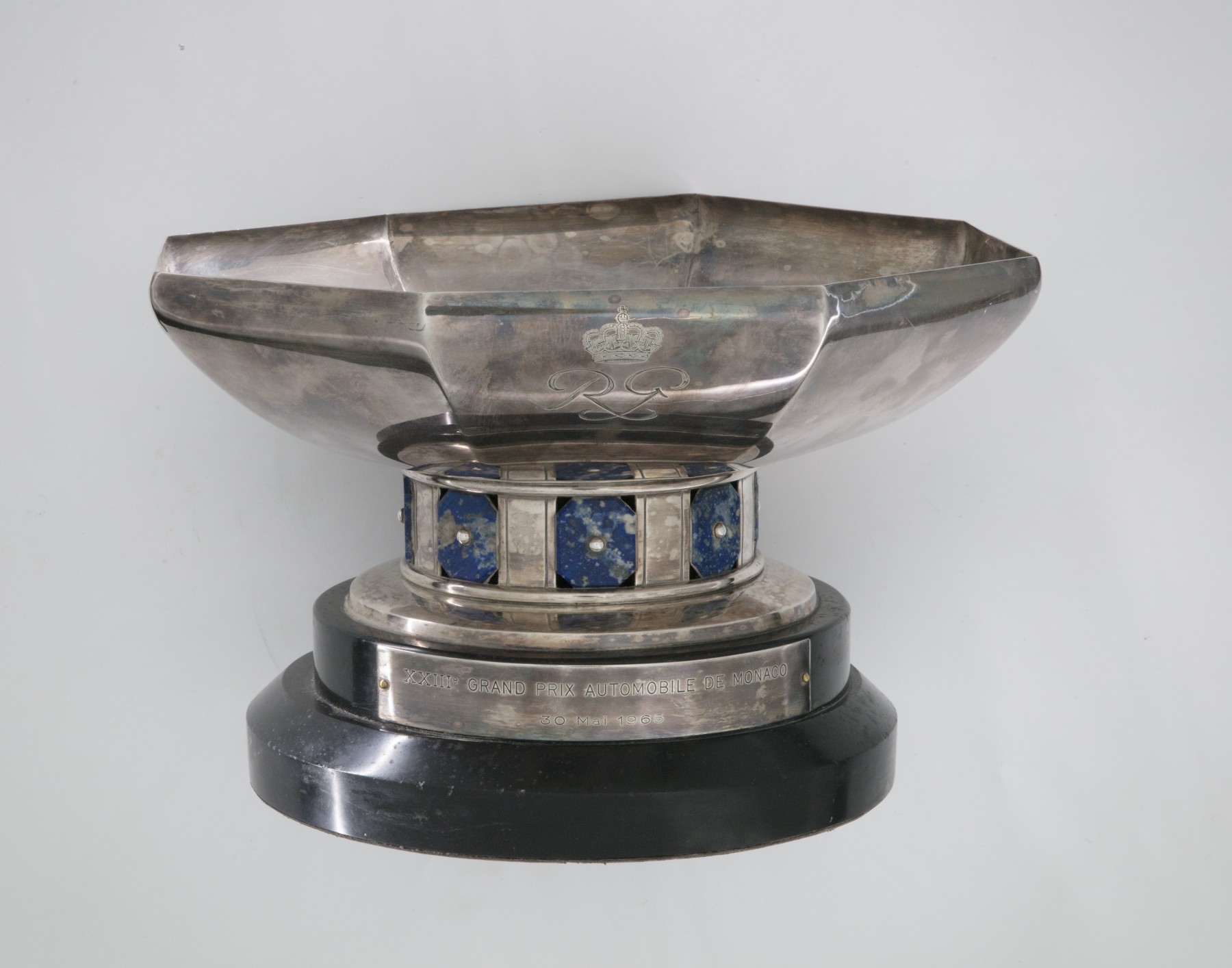 There are also several original images of the presentations of Monaco’s trophies. Monaco established itself as a motor racing social event and with Princess Grace in attendance, it was sure to attract the cameras.

From the sublime to the ridiculous, some trophies, such as the FIA Constructors trophy of 1962 taking the form of a modernist beaker with a simple applied twisted spring decoration made by Jean Puiforcat in Paris. Compared to the massive Australian trophy of 1967, ‘The Dowidat Spanner Trophy’ weighing in at over 10kg with columns, wheeled tyres and globe decoration! Both impressive, but for different reasons.

Carrying out the valuation was also a learning exercise for me. I hadn’t realised that racing trophies from this era were the property of the construction teams and not the drivers.  In Modern F1 races, two trophies are presented: one for the driver and one for the team. A fact not lost on Alain Prost, who at the 1989 Italian Grand Prix, decided to throw his winning trophy into the crowd where it was torn apart as souvenirs. McLaren made him pay for a replacement to be made, telling him it was their property and not his to give away!

Whilst BRM’s trophies have all stayed together, four trophies from the collection are currently on display at The Silverstone Interactive Museum.  The 1962 World Constructors Championship and BRMs 3 BRDC wins at Silverstone - 1957, 1962 and 1965.  The trophies can be enjoyed by a new generation of racing fans keeping the names and successes of a generation of drivers alive from a period of racing history when British made vehicles ruled the Grand Prix World.

To find out more about our Valuation Services contact customerservice@theassayoffice.co.uk

Tickets for the The Silverstone Interactive Museum can be purchased via https://www.silverstonemuseum.co.uk/