Articles which should have been hallmarked when they were made, but bear no hallmark, are now treated as exempt if they were manufactured before a specific date. Since 1999, the date has been 1920, but the amended legislation alters this date to 1950. Therefore, any pre-1950 item may now be described and sold as precious metal, if the seller can prove that it is of minimum fineness and was manufactured before 1950.

6th April 2007 also sees another amendment to Hallmarking legislation in respect of items brought onto the market  pre 1950.

Prior to this date it was not compulsory to hallmark all precious metal articles, and up until now  unhallmarked  items manufactured after 1920 could not legally be described  as silver, gold or platinum.

The new amendment extends the exemption date to 1950 and allows these items to now be sold as gold, silver or platinum without a hallmark, so long as the seller can prove the fineness of the precious metal and that the item was manufactured before 1950.

Information correct as at 5th April 2007

Part 2 of Schedule 1 of the Hallmarking Act, paragraph 10(b) is amended

Any article which was manufactured before the year 1950 and has not since the beginning of the year 1950 been the subject of any alteration which would be an improper alteration if the  article had previously borne approved hallmarks”.

This Order amends the categories of articles that are exempt from the prohibition in section 1 of the Hallmarking Act 1973 (the “1973 Act”) on describing unhallmarked articles as gold, silver or platinum. 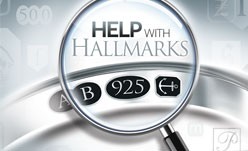 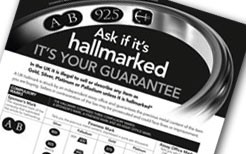